Doctor Who is a 55-year-old child going on 2,000. His mother, Auntie BBC, is a crumpled, cramped, neurotic old fart who was born on the 18th October 1922, which means that it will be her 96thbirthday this week. For many a moon, Auntie lumbered along under the guidance of white Anglo-Saxon men from public schools in high office until suddenly the real world hit her, very hard, and rightly so.

And that little knock proved to be a very good thing. The doors of Auntie Beeb’s abode were prised open, making those dull, white middle-aged controllers wheeze and choke on the fresh air provided by a great wave of unexpected talent that came from women, gays, people of ethnicity and others… and we started, very slowly to witness a bit of a change for the best. Yes indeedy, Doctor Who is the child of the awful old crone that we revere – the Auntie who had good stuff but also allowed  Eldorado to appear on our screens, and series as bizarre as Help Me Anthea, I’m Infested, starring Anthea Turner and an exterminator (along with sundry mice, rats, moles and cockroaches).

But Doctor Who was of another order. Doctor Who was and is great, and I have watched it since I entered my teens, from the time when it appeared in black and white, starring William Hartnell through to the glory years of Tom Baker in 1974. 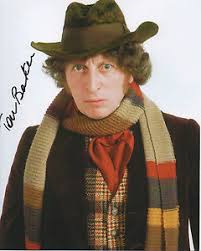 Tom Baker was, of course, the greatest incarnation of them all. By the time Tom Baker appeared I was in my 20s, but I still loved my mummy sooo much for knitting me the Doctor’s stripey scarf for Christmas. It was a very special present. It was a sad day when Tom Baker went… I found it tricky to even accept the Doctors portrayed by Peter Davison, Colin Baker or Sylvester McCoy.

And years passed, and the aged Auntie (who by now had come to her senses) revived the good Doctor, and although Christopher Eccleston appeared when I was a mere babe in my fifties, it seemed exciting that such a great hero should return. And of course, David Tennant was truly wonderful, the family just loved him, and Matt Smith rather less so. I personally adored Peter Capaldi, but some of the episodes seem to leave much to be desired, and a certain tiredness crept into some of the scripts… particularly the stinker concerning the Doctor repeatedly banging his head against a stone wall for thousands of years ‑ an interesting metaphor for a script writer clearly bereft of ideas.

But now great changes are in the air and afoot and around, and we have yet another incarnation of Doctor Who – Jodie Whittaker, and let’s face it, she looks very much like the best since Tom Baker and David Tennant.

Sadly, I am at choir practice this evening, so I won’t be able to catch up with the latest antics of the Doctor until later tonight, but I will do so. It all looks very promising, the companions are lovely, and there is only one thing missing — I just feel a bit discombobulated until the Tardis reappears.